The Humble Beginnings of the Cash Register

The Humble Beginnings of the Cash Register

Imagine a store without a cash register. Imagine there is no other accurate way to tally up daily sales. How could a business stay open? With today’s technology, it’s difficult to imagine what life was like before all of our modern day conveniences were invented.

But, this was the reality for all retail establishments before the 1880’s. Most store owners were left in the dark about whether they were making a profit or loss —and many suffered since it was easy for sale clerks to steal from the cash drawer.

That all changed with the invention of the cash register following the Civil War by a little-known saloon owner, setting into motion decades of innovation. Here, a look at the history of the cash register and some highlights at NCR, formerly known as the National Cash Register Co., which helped to make the machine ubiquitous at stores across the country starting in the early 1900s:

—1879: James Ritty, a saloon owner in Dayton, Ohio, patents a machine with a mechanism that’s inspired from the apparatus that counts the spins of an ocean liner’s propeller in its engine room. that so-called ‘incorruptible cashier’ was the first mechanical cash register and had metal keys with denominations pressed into them to indicate the amount of the sale. There was a bell to ring up sales.

-1880-1883: Ritty’s mechanical register catches the attention of John H. Patterson, a businessman, who purchased several machines for his general store in Coalton, Ohio. He buyers several more for his retail coal business in Dayton, Ohio.

—1884: Patterson bought the rights to Ritty’s invention from Jacob H. Eckert, who had purchased the rights from Ritty for $6,500. He renamed the company the National Cash Register Co. and started to put the registers into production. The company still exists today and is now known as NCR, the global technology firm.

—1888-1895: Eighty-four companies sell cash registers but only three actually survived long-term. Patterson, who aggressively bought out his competition and had a flair for sales, sets up an inventions department to create bigger and better thief proof registers. He opened the first training program for his salespeople.

—1902: The cash register offers shopkeepers cumulative totals and can give an audit trail of transactions. That helps businesses collect market research data.

—1906: Charles Kettering, the researcher for the National Cash Register Co., designs the first register powered by an electric motor.

—1915: The cash register, dressed in fancy cast-metal cases, became an essential tool in nearly every retail establishment. The registers were made of different materials including brass, cast-iron, and wood. National Cash Register ran the largest brass foundry in the world during this period. By 1915, more than 1.5 million cash registers were sold. 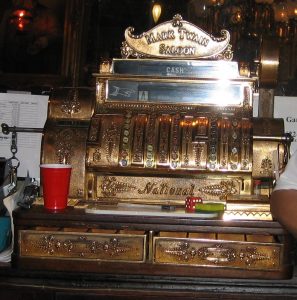